Inspiration to students and visitors
​
Stories from "Rising Africa"
​ 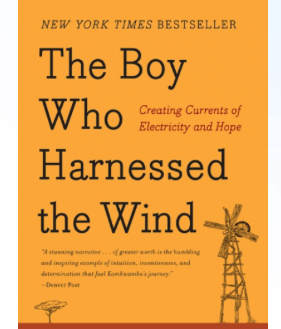 "The boy who harnessed the wind"http://www.williamkamkwamba.com/

'The Boy Who Harnessed the Wind'.  He's amazing and made himself famous a long time ago. Local farmers and journalists investigated his spinning device and Kamkwamba's fame in international news media skyrocketed. He's got a website, a documentary, a TED Talk, a biography, a movie, a wiki page. https://www.ted.com/talks/william_kamkwamba_how_i_harnessed_the_wind?language=en
It is very interesting that a poor country come up with with a solution. They may lack funds, modern infrastructure, and government that is truly for the people, but they do not lack the intelligence, nor inventiveness of the rest of humanity! I've seen some very impressive innovations in myself. Never underestimate the who are less blessed by making the difference. 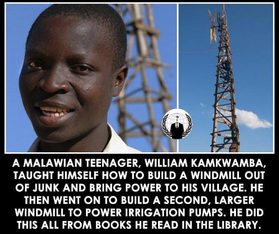 This 22-Year-Old Is Already An Engineer At NASA

Here is a short story from the web:
As a Rocket Structural Design and Analysis Engineer for the Space Launch System that aerospace company Boeing is building for NASA, Guinn designs and analyzes parts of a rocket that she said will be one of the biggest and most powerful in history.
Guinn, whose career trajectory seems like a sequel to the much-acclaimed “Hidden Figures” movie, has been aspiring to become an aerospace engineer since she was a child.
Her mom, who noticed her daughter’s skills from a young age, made sure to Guinn stayed sharp by putting her intelligence to use…at the supermarket.
“When [my mom and I] would go to the grocery store, she would get me to clip coupons [and] put it in my coupon organizer,” Guinn told WBRC News. “By the time we got to the register, I’d have to calculate the exact total, including tax. And I did that since I was six years old.”
“One day I saw a plane fly by and I just had this realization, ‘huh, I can design planes. I’m going to be an aerospace engineer,”’ Guinn said.
She chose all of her middle school classes accordingly and commuted an hour to go to the high school that would best prepare her for the future.
Now, Guinn will soon be graduating from MIT with a 5.0 and is clearly on a path to success. She said she’d advise young girls looking to follow in her footsteps to expect obstacles throughout their journey.
“You have to look forward to your dream and you can’t let anybody get in the way of it,” she said. “No matter how tough it may be, no matter how many tears you might cry, you have to keep pushing. And you have to understand that nothing comes easy. Keeping your eyes on the prize, you can succeed.” 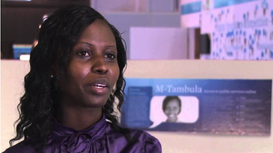 Brenda Katwesigye lives in Uganda. Uganda is a country that is not known for its technological infrastructure or even its cell phone service. Even so, this innovative entrepreneur is the brainchild of the mobile app InstaHealth, which, according to Black Enterprise, “instantly connects users to health centers, medical specialists and ambulance services, and allows them to share their health experiences with millions of people.”
Katwesigye was working on a medical project while she was studying at university. She not only learned about the limited accessibility Ugandans had to health care, and how expensive it was, she received a first-hand education. During her research, she went to a small village 500km (310 miles) away from a major city. While she was there she got sick and did not know how she was going to get health care. She said, “I fell sick and I had absolutely no idea where I was going to get any help at that point. That’s when the concept of InstaHealth clicked.”
Katwesigye realized that despite the lack of physical internet wiring, over 40 percent of Ugandans are connected to the mobile internet. She told Black Enterprise that she has already been a “part of a global accelerator in Silicon Valley (Blackbox Connect) [and] even been awarded by the International Telecommunication Union for this product.”
She hopes to build the technology even further, tailoring it for healthcare professionals like doctors and nurses while still making it useful for specialists. At the same time, she wants to keep it affordable and meaningful for the mass market and the health sector.
She told Black Enterprise that her biggest challenge is avoiding “scope creep”. The project started with a simple idea that has blossomed into a full-scale package with multiple modules. Instead of putting out a beta and improving upon it based on feedback, the team tried to create a perfect product. Learning from their mistakes, they have decided to focus on one module at a time with the initial one being the doctor consultation platform.
Katwesigye would like other visionaries to know that it does not take a lot of money to start your dream. It does take inspiration and support. She said she watches a lot of  of TED videos for inspiration, and her family and friends have been with her for support. She did not try to go it alone.
When asked to pick two qualities that were imperative  to her success, Katwesigye chose perseverance and prayer, though she added success is found in being passionate about what you’re doing. That way when you’re tired and want to give up, you will have the drive to push forward.
Proudly powered by Weebly